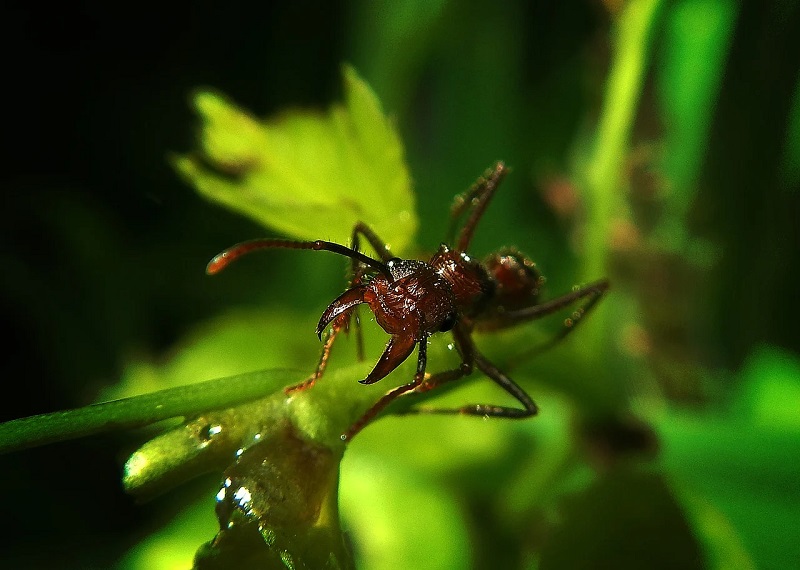 The term ‘fire ant’ doesn’t to refer to just one species of ant. Rather, it is a term that encompasses over 200 species of ants belonging to the genus Solenopsis. Most species of fire ants are not invasive. However, one species, Solenopsis invicta, is an exception. This particular breed, sometimes referred to as the red imported fire ant, or RIFA, was inadvertently introduced to the United States in the 1930s. They arrived in Alabama after stowing away in shipping crates that arrived from South America. These fire ants have since spread throughout the southeastern and southwestern states. They also live in other regions around the world including Asia and Australia.

About Fire Ants and Their Bites

Red imported fire ants are an aggressive breed that vigorously defend their colonies. While they feed on plants, they also enjoy dining on worms, spiders, insects, and dead animals. In fact, they are known to attack and kill small animals such as birds and rodents . Like other ants, fire ants are social and live in colonies that can have well over 250,000 workers. The workers have a life span of about 180 days, but queens can live for over six years. Furthermore, queens can lay up to 1,600 eggs per day. That can add up to a staggering 3.5 million offspring. This is one reason fire ant colonies grow so quickly and can rebound when decimated.

Because fire ants are so aggressive and live in such large colonies, it’s not uncommon for people and animals to come under attack from large groups of fire ants. If you don’t want to experience the pain of fire ant stings, keep your eyes peeled for any signs of them. Seeing even one or two fire ants is usually a good indication of a nearby colony. Remember, they are aggressive and won’t hesitate to defend their turf. They aren’t as destructive as termites, but they can damage buildings if they are left unchecked.

As with many other species of ants, fire ants range between about 2 to 6 millimeters in length. Fortunately, their reddish upper bodies and dark abdomens make them highly distinguishable from other ant species. Their nests are also rather unique in that they don’t have an opening in the center. Depending on the size of the colony, mounds can be about eight inches high and two feet in diameter. Of course, they can get much bigger. Fire ants prefer settling in moist areas close to a food source and workers forage up to 100 yards from the nest. If you see any sign of fire ants around your house or yard, you should probably get rid of them.

Most species of ants will bite their victim and then spray a type of acidic compound into the wound. Not fire ants. Instead, they sink their mandibles into their victim’s skin to get a firm grip. Then, they inject an alkaloid venom using a stinger. This venom is mostly an oily alkaloid mixed with a bit of toxic protein. For humans, the stings are usually nothing more than an irritation, but they can be fatal if the victim has a severe allergy. Nevertheless, fire ant stings are almost always painful. Many people who have been on the receiving end of a fire ant sting describe feeling an intense burning sensation.

The immediate burning sensation of a fire ant sting is sure to get your attention. Thankfully, this searing pain doesn’t last long. It typically takes between a few seconds and a couple of minutes to subside. However, there is usually a lot more discomfort to come. Within a couple of hours, many recipients of fire ant stings develop a rash with raised bumps. While this doesn’t cause the same type of discomfort as the initial sting, it’s still quite irritating and often itchy.

Within 24-36 hours, these bumps have the potential to turn into white pustules that look similar to pimples. Be careful not to scratch them. By doing so, they can become infected and leave permanent scars. They normally flatten out within two or three days if you leave them be. Most fire ant stings completely heal within a few days even without treatment.

The fire ant’s venom contains a small amount of toxin that targets the nervous system. On its own, a single sting won’t cause any significant side effects beyond the normal symptoms. It can be very different if a person is swarmed and stung multiple times. On top of the compounded pain that a large number of simultaneous fire ant stings produces, some victims of mass stings have reported seeing hallucinations.

The consequences of fire ant stings can be extremely severe for those who are allergic to the venom. A person with such an allergy could experience anaphylactic shock, which can be fatal if not promptly treated. Seek immediate medical attention if you experience or witness any of these symptoms after being stung:

How to Avoid Being Stung by Fire Ants

Prevention is the best medicine. The best way to avoid being stung by fire ants is steering clear of them. Stay away from nests and areas where they are prone to colonize. Fire ants like moist, open areas which is why people often find colonies on lawns and in their gardens. Whatever you do, don’t stomp or kick a fire ant nest if you see one. This is a sure-fire way to provoke an attack. Wear shoes and socks when you mow your lawn and throw on a pair of gloves if you’re gardening. There are also some effective fire ant repellents that are effective against foraging ants.

Fire ants aren’t found in homes as much as other household pests like mice. Still, they have been known to invade houses during extreme weather. They are also naturally drawn to sources of food and water. Be sure to fix any leaks around the house, block possible points of entry, and keep your food and garbage securely stored. Don’t give them a reason to stop by for a visit. If your house is the target of a fire ant invasion, you need to remedy the problem as soon as possible. Advion and Extinguish Plus are effective fire ant baits that can wipe out entire colonies. Don’t hesitate to call in a professional.

Most people need not seek medical treatment after they have been stung by a fire ant. Some basic first aid is usually more than enough. As long as you aren’t displaying any severe symptoms like difficulty breathing, tightness in the chest, or swelling of the tongue or throat, you’re probably going to be fine. If these serious symptoms present themselves, it might be a good time to use an EpiPen if you have one. If not, at least take an antihistamine like Benadryl or Claritin. Get to the emergency room as soon as you can.

Under normal conditions, expect the immediate effects of the sting to linger for a couple of minutes. There isn’t much you can do about that, although applying After Bite or StingEze might bring some degree of fast-acting relief. After washing the wound with soap and water, you can apply a cold pack to the affected area in 20-minute intervals to help reduce the swelling. Make sure there is a buffer between the ice and your skin. After that, try applying a topical hydrocortisone cream to alleviate the itching. Raise the part of your body where the sting is to keep the swelling down. Treating a fire ant bite is similar to treating cockroach and mosquito bites.

No matter how tough it is, resist the urge to scratch the area. The sting blister could open and the wound could easily develop an infection. If you happen to give into temptation and scratch the blister causing it to open, apply a triple antibiotic ointment like Neosporin to the area. This will relieve the irritation and help prevent the wound from getting infected.

There are many natural and home remedies that do a great job with treating fire ant stings. Something as simple as warm water can help. Right after being stung, put the affected area under a stream of warm water or submerge it. This helps neutralize the venom and ease the associated pain and itching. After doing that, you can apply an essential oil such as lavender, peppermint, or basil. These essential oils contain ingredients that can help mitigate the pain, itching, and swelling.

Many people are now using apple cider vinegar for weight loss. It is also immensely useful for treating fire ant stings. It contains an acidic composition that helps counteract the alkaloids in fire ant venom. Furthermore, it possesses an antiseptic that can reduce swelling and prevent infection. Try rubbing some on the sting area. If you don’t have any apple cider vinegar kicking around, make a paste using baking soda and water. Apply it to the sting and let it sit for about 10 minutes. This should significantly reduce the irritation. You can also make a soothing paste out of baking soda and lemon juice.

Believe it or not, powdered meat tenderizer works well too. As it turns out, papain is one of the ingredients in meat tenderizer. This enzyme has proven effective in reducing the pain and irritation caused by fire ant stings. A study conducted at Texas A&M found that a half-and-half mixture of bleach and water reduces the irritation and may prevent the formation of pustules.

If the itching persists, you can soak in an oatmeal bath for half an hour. Oatmeal is well-known for its ability to ease a wide range of skin irritations. Many people who have had chickenpox will attest to this. Other possibilities include diluted ammonium, aloe vera, and witch hazel, although no hard evidence exists to confirm their effectiveness.

Medications and Other Treatments

Most fire ant stings do not require medical attention. Most people who receive stings from fire ants just grin and bear it. However, there are a variety of over-the-counter medications that help minimize the irritating symptoms. Paracetamol helps ease the pain, but it can take up to an hour to kick in. One or two 500mg tablets should do the trick. Some of the most common brands are:

Hydrocortisone skin creams contain corticosteroid. This is a steroid, but it isn’t the same as anabolic steroids. When applied directly on a fire ant sting, these creams soothe the skin and reduce swelling and irritation. Caladryl, Eucerin Calming Itch-Relief Treatment, and antihistamine creams like Benadryl Extra Strength Anti Itch Cream can also work wonders.

While these medications are generally safe, you should always read the directions and any warnings before using them. This is particularly important when giving them to children. Some medications can cause adverse effects. Especially if mixed with other medications. You should seek medical attention if you experience any side effects.

Fire ant stings affect different people in different ways. For some, the effects of fire ant stings are not much more irritating than mosquito bites. A lot of people don’t even bother treating them at all. For others, fire ant stings can be very painful and treatment is necessary. Taking the right precautions will minimize your chances of having an encounter.  Making your yard inhospitable to them and keeping your house clean is a start. If you come across a nest in your travels, simply move along and don’t provoke them.