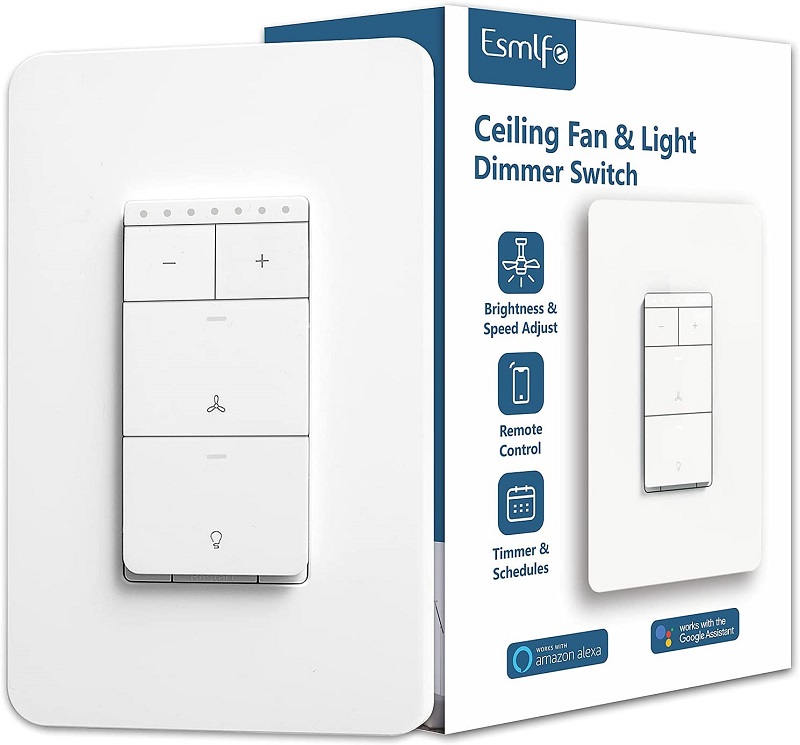 Dimmer switches can be awesome when installed in a home. It is a way to set the right mood, change a routine, or create a custom living experience. Installing dimmer switches is a common DIY project that most homeowners can complete in just a few minutes.

The problem with a dimmer switch is that it can be easily overloaded. It can also cause problems for the ceiling fan if it is directly connected to it. The switch could damage the motor on the ceiling fan. If the switch is overloaded, it could heat up and start a fire.

Both are bad outcomes. Now here’s the good news: these bad outcomes are associated with a standard dimmer switch. Some switches are designed specifically to work with ceiling fans and will have a speed control that will provide the customization you may want or need at the switch.

What Can I Do If the Ceiling Fan Is Already Wired?

The best option you have for a ceiling fan that is wired to a standard dimmer switch is to change it out for a simple toggle switch. Although this will eliminate your ability to dim the light on the ceiling fan, it will also reduce the risks of damage to the fan or your home.

If your ceiling fan has wiring already in place where you have a separate switch for fan control, then you can have the separate controls wired to independent switches. In this circumstance, the light kit could be connected to a dimmer switch and the fan motor connected to a toggle switch.

You may be required to hire a professional electrician or qualified handyman to complete this job. Not every homeowner’s policy will cover a DIY installation.

If you have an existing ceiling fan that is more than a decade old or your new ceiling fan with lights was given a retro install, then you likely don’t have the wiring in place for the separate controls. You can still have the same benefits, however, if you use a remote and receiver combination that is wired directly to the ceiling fan.

SFGate offers instructions on how to install a ceiling fan light dual dimmer switch that will take you through the complete DIY process if you wish to avoid hiring a professional.

What Can I Do If There Is Only One Switch Available?

If you only have one switch available for your ceiling fan, then there are two options available to you.

The latter option may require running wiring over the ceiling and down the wall to the box, where you can then change the single switch to a dual switch. Some communities may require a building permit for this action to be taken.

For many homes, a dimmer switch is a nice feature, but not always something that works well with a ceiling fan. Make sure your wiring meets coding requirements and never hook up a standard dimmer switch to the actual fan motor to avoid potentially devastating results.